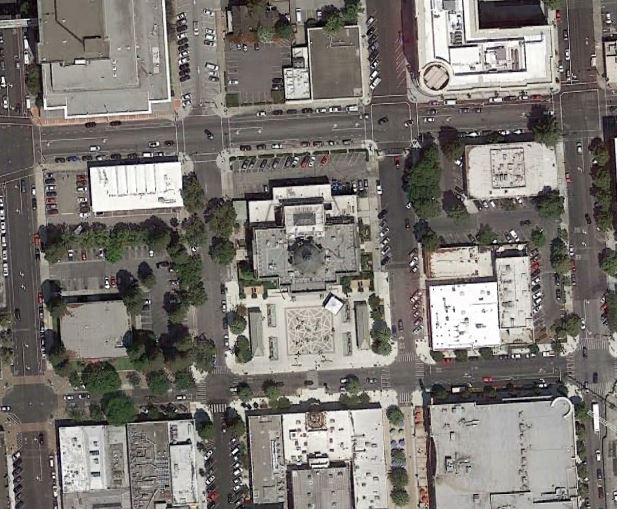 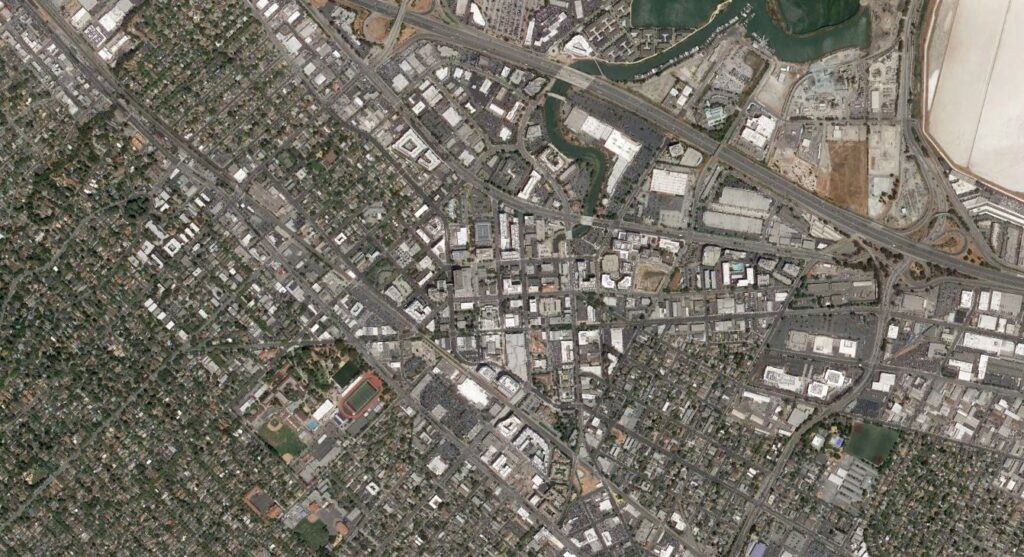 Courthouse Square is the cultural heart of Redwood City, though most of its government buildings lie elsewhere. As the name suggests, the square is the plaza in front of the building with the rotunda, however the building has been converted from the county courthouse into a history museum. Across the street, which is frequently closed to auto traffic, is the Fox Theater. The Square is immensely successful, and has been integral to the revitalization of Redwood City’s downtown, for a variety of reasons. First is that it is simply a nice place to be. Auto traffic is low speed and relatively infrequent due to traffic calming measures, it is within walking distance of most downtown attractions and regional transit, and the layout comfortably encloses the space. Broadway, the diagonal street which runs across the train tracks, also provides the Square with sight lines and helps open the space as well. Though Redwood City lacks the history of many Roman settlements, it has taken some spatial design cues from the Roman tradition. Second, the Square is the great gathering place for most civic events. From movie nights to concerts to the local cultural festivals, they all take place in and around the Square. Finally, the Square itself provides amenities and amusement, ranging from a tea shop to fountains and the museum itself. Overall, Courthouse Square is an excellent example of a small civic space at the human scale, and it is immeasurably important to Redwood City’s cultural and civic growth. 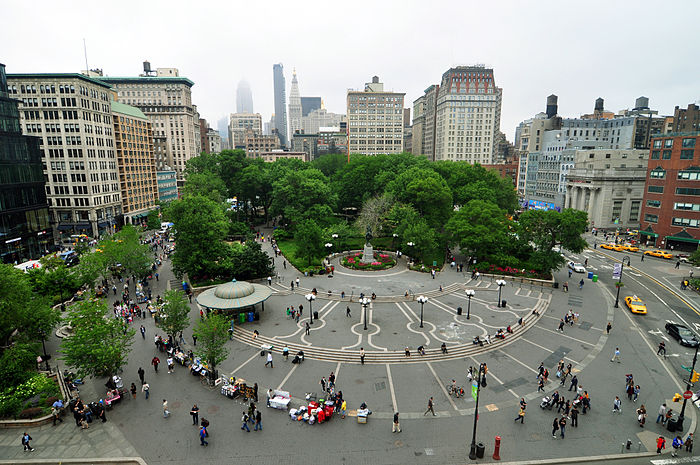 Union Square Park in New York City was built in 1839 and has served for nearly two centuries as a gathering place for the residents of downtown Manhattan. The form of Union Square is such that it can be used for many different purposes— for commerce, for entertainment, for political events/rallies, and for recreational uses. The park is intersected by many paths that are bordered by pockets of green, vegetated areas— a style that was inspired by London’s residential squares. The design of the park emphasizes its oval shape with a walkway circumnavigating the park, and a large statue within its center. As downtown New York has evolved, Union Square Park has served and existed for its community. While it has undergone many changes over the course of its history, Union Square has become an integral aspect of the culture of New York— the grounds of which have frequently been used as a focal point for protests, political rallies/events, public meetings, and rap battles. While it is often criticized for attracting a large homeless population— in many ways, this only further serves to demonstrate how the Park exists to serve the wide range of cultures, ethnicities, and socioeconomic backgrounds of New York City. 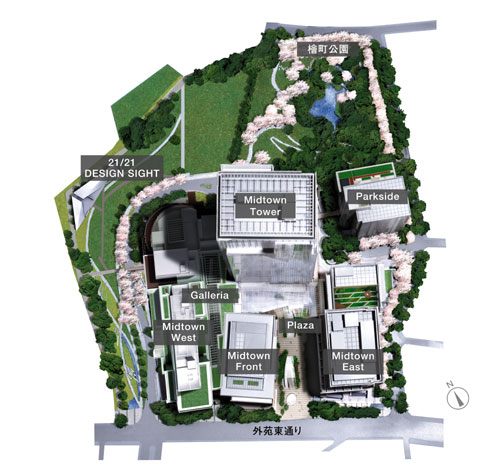 Hinokicho Park is located in midtown Tokyo, a well-developed area consisting of commercial building, premium high raise apartment and office buildings in addition to the 21-21 design sight museum. The area has a unique mix of Japanese traditions, modernity, art and fashion. The cherry trees along the perimeters of the space separate the park from the outside world, in a both physical and spiritual way. 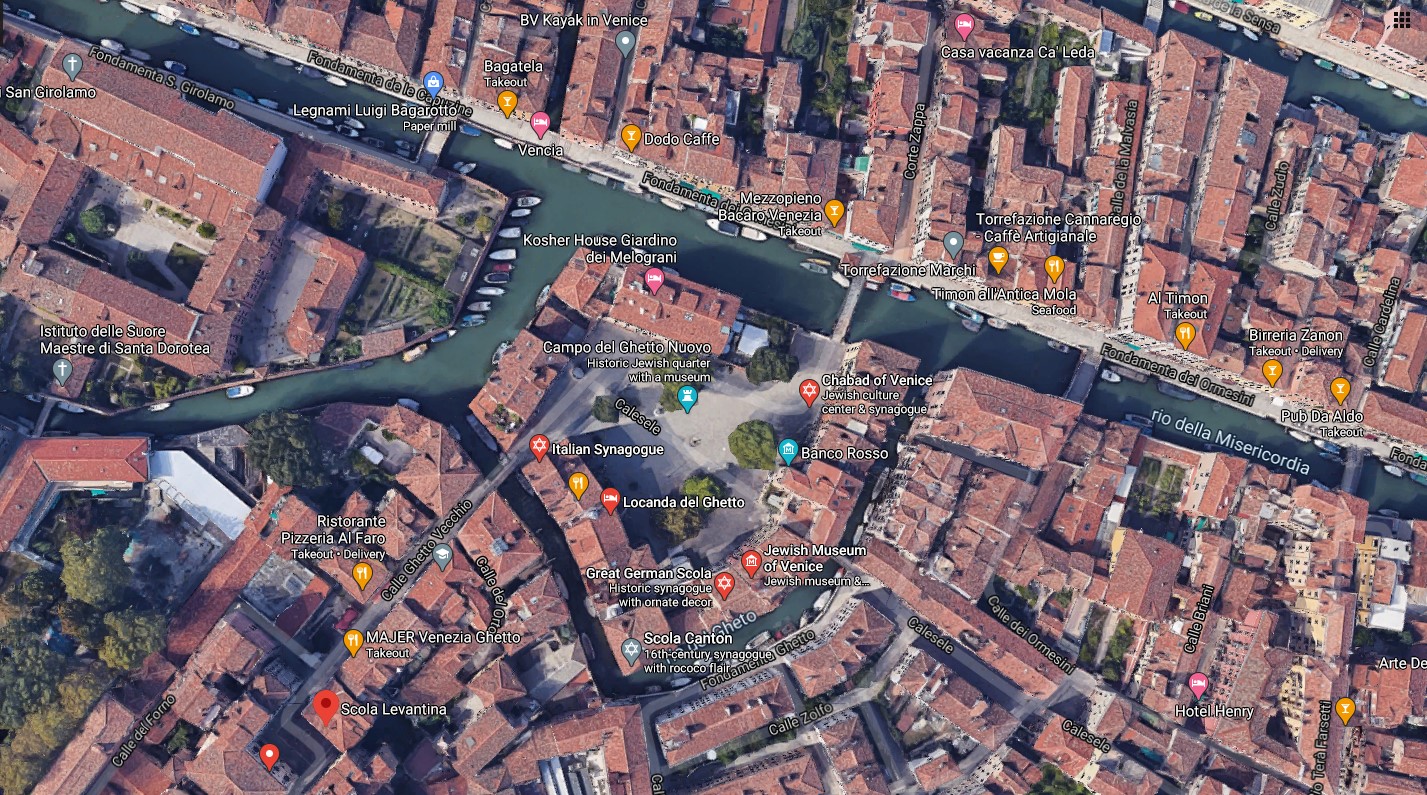 The Venetian Ghetto was a segregated section of northern Venice where Jewish people in Venice were forced to reside, and return to by a nightly curfew starting at 1560. It is the origin of the term “ghetto” that is used to describe other segregated, slum-like areas predominantly occupied by minorities today. Venice was a medieval city notable for its functional zoning, and decentralized neighborhood clusters revolving around public squares.

The Campo di Ghetto Nuovo centered the Jewish Ghetto, where up to 5000 Jews from Italy, Germany, France, Spain and the former Ottoman Empire both maintained their own synagogues all with entrances to the square. This also created a unique opportunity for cultural exchange, and an example of the potential for the medieval Jewish Diaspora communities.

Around the square and elsewhere, the ghetto stacked up to 9 floors because of overcrowding, making them able to view the rest of the city from above. In 1560, the Venetian Board of Trade required Jews to barricade any windows and doors that overlooked the canals.

Some critics would point to the Jewish Ghetto as an example of the risks of planning overly restrictive “urban villages” that contain rather than connect its inhabitants for these reasons above.

“Yama” (Russian for “the pit”) is a folk name given to a public amphitheater structure built around a part of Moscow’s old fortress wall. Planned as a historical open-air site in one of the liveliest parts of the city center, the pit became very likened and populated by young citizens. While monumental parks and public spaces, the Red Square, the Kremlin often feels like a fake-ish tourist attraction to Russian metropolitans, “Yama” organically became a true Muscovite’s place: people came here to socialize, listen to independent lectures and free music concerts, and most importantly – openly drink. In Russia, it is illegal to drink alcohol in public spaces, so usually, people would drink sneakily, get very intoxicated, and cause social disturbances. However, “Yama” became a morally different region of the city center – what was prohibited elsewhere, became more a limited (people would only drink a little), yet normal practice in the amphitheater. I think it is very interesting how this small civic place became a zone where the common law is ignored both by citizens and the police (it is situated right next to a police station), due to Moscow’s demand for a place where people could drink a bit and not worry about getting caught. 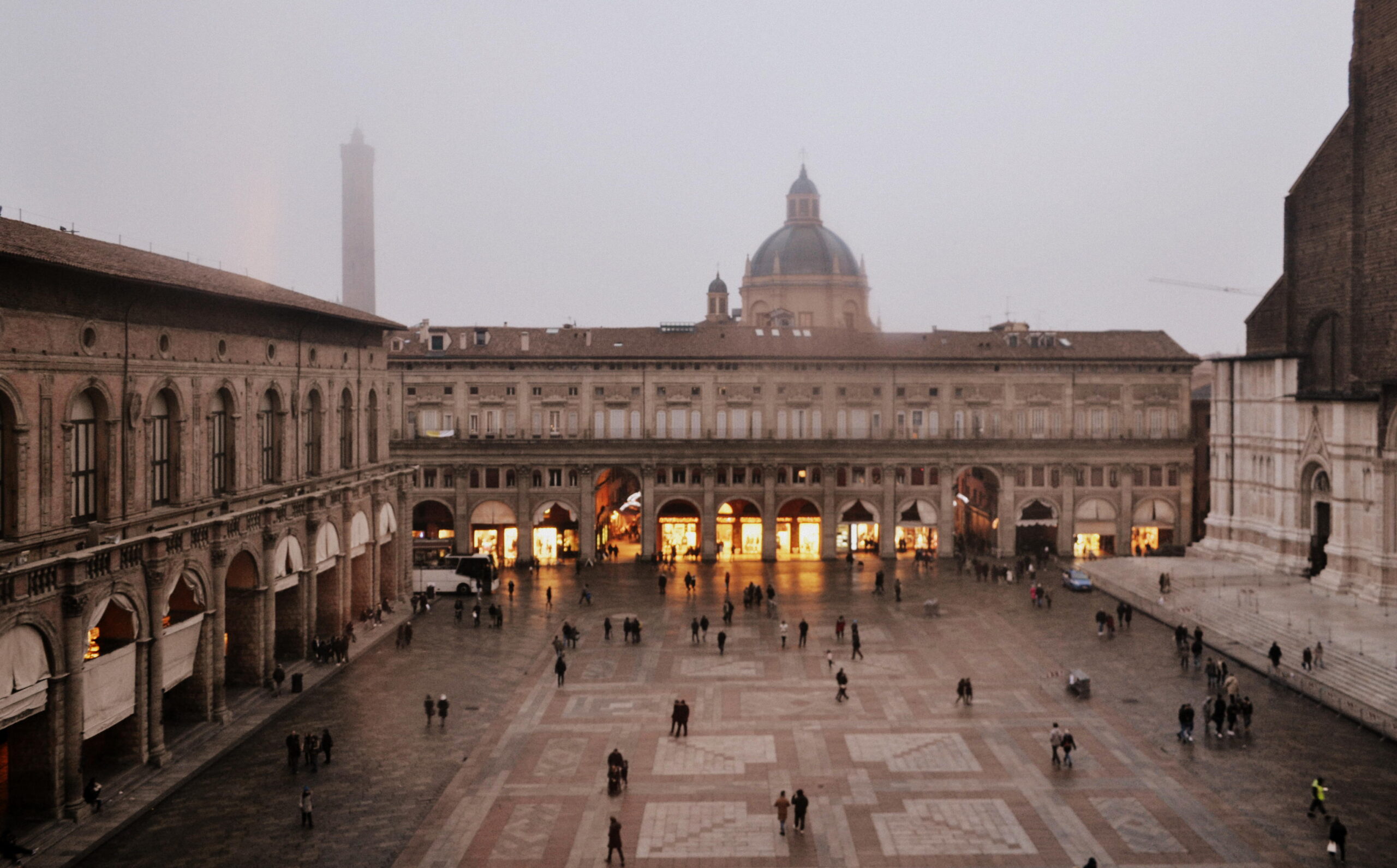 Built in medieval Bologna during the 13th century, the Piazza Maggiore is an example of the ideal medieval city square, and it remains one of the most important civic spaces in modern Bologna. The piazza is located at the geographic center of Bologna, and it is well-connected to the surrounding areas, with multiple roads and walkways branching out of the square for easy pedestrian access. It is also adjacent to the smaller Piazza del Nattuno, another central gathering space. Today, the piazza features both important civic buildings and monuments, from the centuries-old Basilica of San Petronio to the central pedestrian platform, which was built less than 100 years ago. 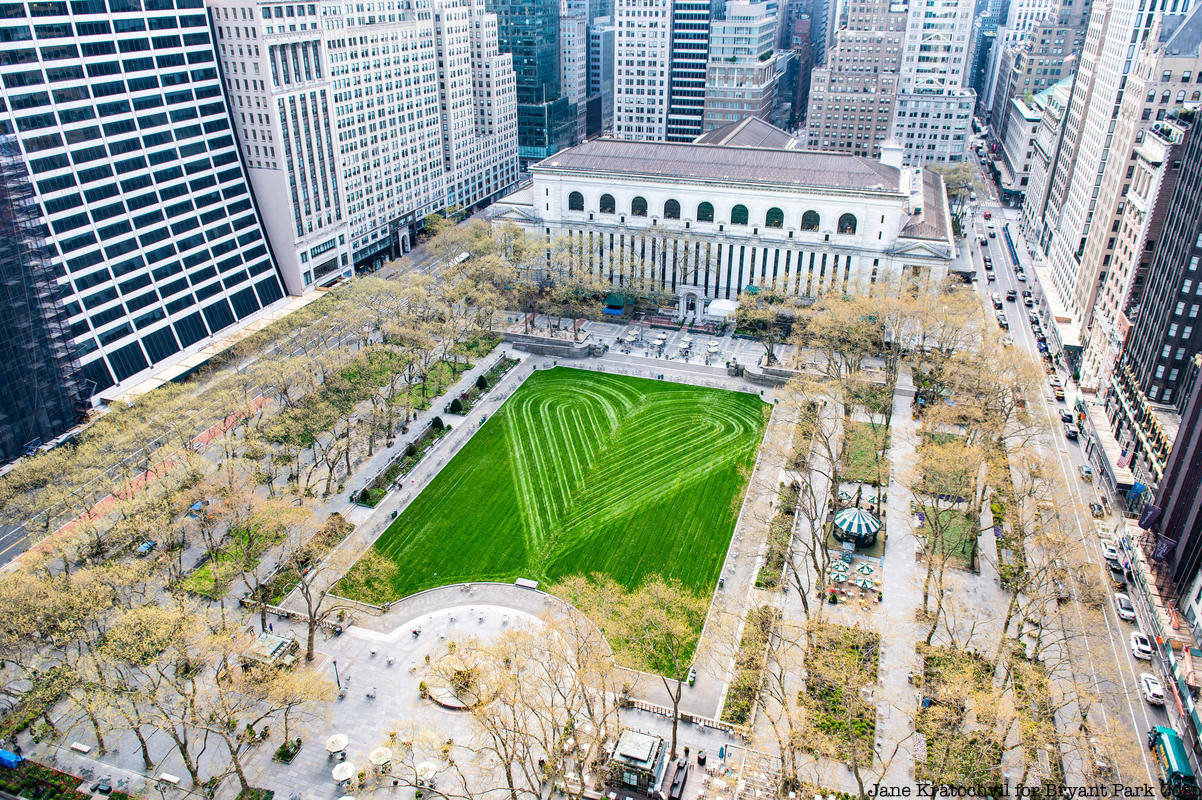 In 1884, the existing park in the area was renamed to Bryant Park, in honor of abolitionist William Cullen Bryant. With its location being in Midtown Manhattan, several transit lines and infrastructure projects were built around it, such as the city’s first subway line and the Catskill Aqueduct. Throughout the 1900s, the area saw major renovations and attempts at countering neglect from the city. Many public events took place here, such as an aircraft demonstration during World War II and outdoor summer concerts. Its current design was officially finished in 1992. It contains the main branch of the New York Public Library and a large lawn that doubles as an ice rink in the winter. Its main use is a passive recreation space. 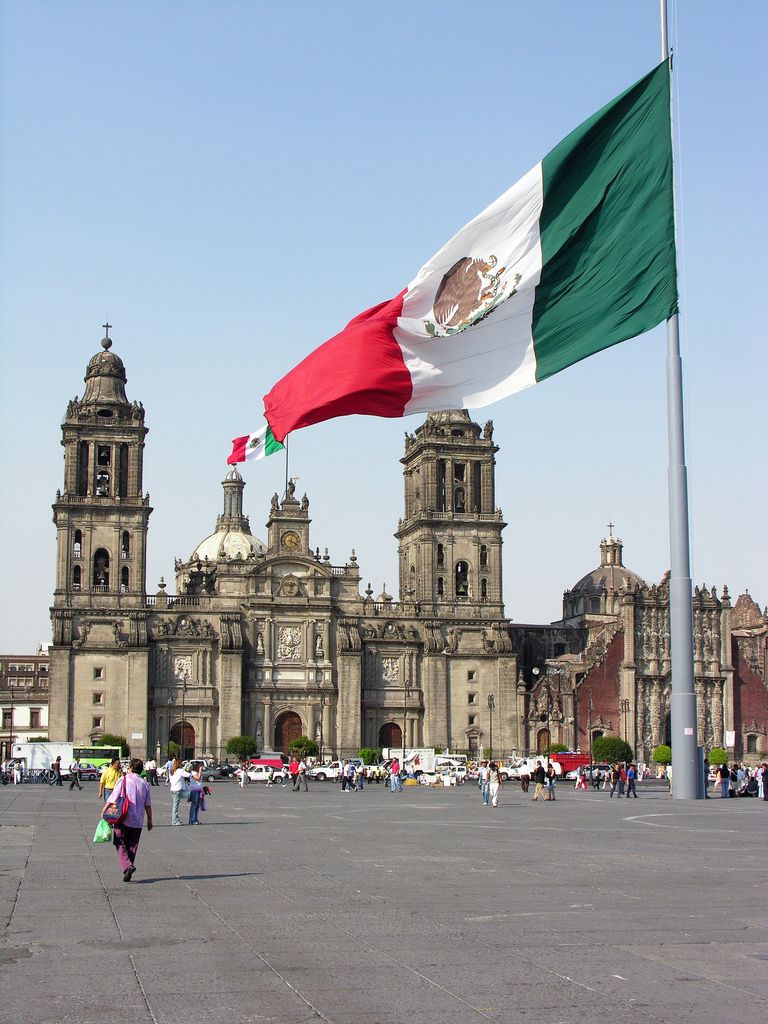 Zócalo, is the main city square in Mexico City, and first began as a gathering place for religious rites and commercial purposes during the Aztec times, in what used to be called Tenochtitlan. After its conquest, Alonso Garcia Bravo tore down most of the Aztec temples and pyramids, and built buildings for the empire’s symbolic significance like the Metropolitan Cathedral, Palacio Nacional, and marketplaces. Over the years, Zócalo became a space for several historic events such as Grito de Dolores, and the 1828 Parián Riot for Mexican Independence. Today, after efforts to revitalize the area, Zócalo has become a space for parades and cultural events like the Festival de México, and it has continued to host political gatherings and protests. Zócalo is a space that has been transformed many times for the ruling power’s purposes , but it has remained a gathering space for civic action, democracy and culture. 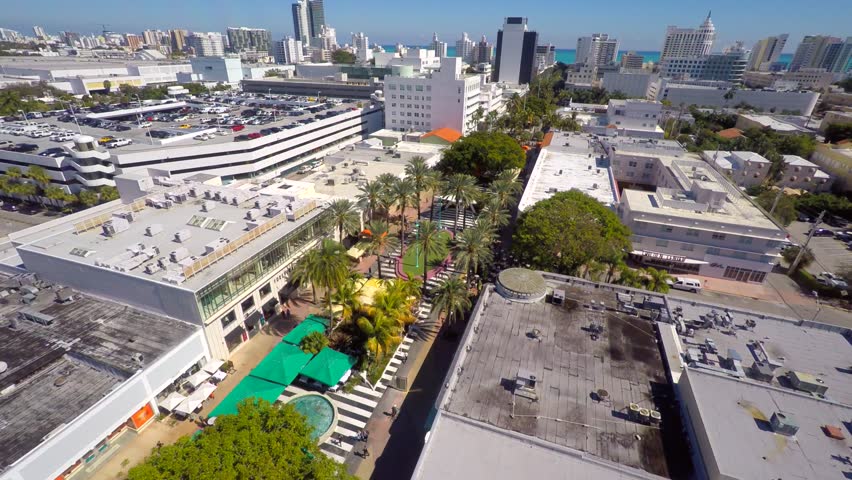 Designed by Morris Lapidus in the 1950s, Lincoln Road’s pedestrian corridor became one of the first outdoor malls in America.  The layout and architectural flourishes represent a greater attention towards merging public and commercial spaces that continues to be replicated – arguably through poorly copied town centers.  After a period of decline in the 1970s, Lincoln Road redefined itself as a community hub for artists and young professionals.  However the flexibility of this space has been questioned as it’s catered to tourists over the last few decades.  With the threat of climate change, many now question the site’s long term future.
Image source: https://www.shutterstock.com/video/clip-8901133-aerial-video-lincoln-road-miami-beach-fl 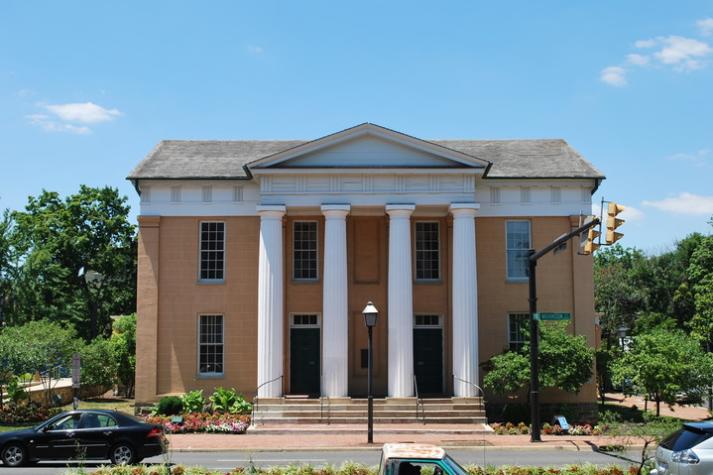 The Lyceum is a small, antebellum building that is home to Alexandria’s city museum. Originally built as a library, the building’s neoclassical style distinguishes itself from nearby row-houses and establishes itself as a major landmark and civic space of Alexandria. The building’s prominence as a civic space is also heightened by its location at the crossroads of two major avenues, Prince Street and George Washington Memorial Parkway, and its location in the center of town. Today, the building continues to serve the public by hosting public programs and exhibitions; the building’s large hall is home to frequent concerts and is rentable by the public. The Lyceum is proof that civic spaces do not need to be large to have a big community impact. 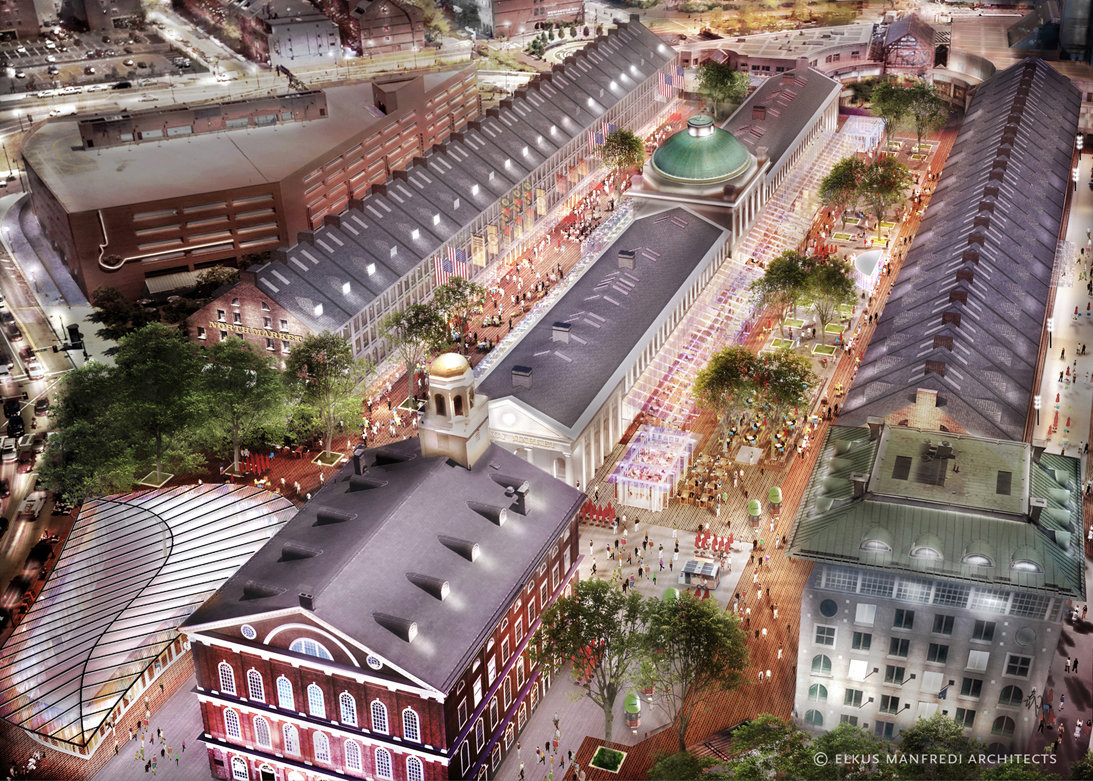 Faneuil Hall was founded in 1742 as a central marketplace for crops and livestock in downtown Boston. As England attempted to enforce taxes on the colonies, it emerged as an important meeting place in the late 1700s, as well as providing storage space for the American military. In 1825, it expanded to Quincy, North, and South markets, which include restaurants, bars, and shops selling a variety of merchandise, collectively now known as Faneuil Hall Marketplace. Today, it is still considered Boston’s central meeting place that offers tourists and residents a historical urban marketplace with unique shops, restaurants, and outdoor entertainment. 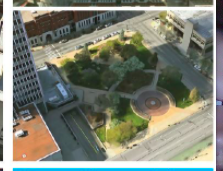 Jefferson Square Park in Louisville, KY was built in the 1970s, replacing what was called the “Center Building.” It sits across from the District Court, the Circuit Court, City Hall, and the County Clerk, some of which were built as early as the 1870s. It looks most like Andres Duany’s “Double Axial Square,” though it does not contain any buildings, because of the central circle and the paths that jut out from it. It is supposed to serve the same general function as the agora or the forum–a central place where people can congregate, especially because it sits in front of buildings that hold symbolic and practical weight. There have been many kinds of public political events there, from gatherings to commemorate fallen firefighters and policemen, to protests against the city and the police department for the killing of Breonna Taylor. It is in part because of these more recent protests that I chose this square: it has become a central fixture in Louisville that it hadn’t been beforehand, a now vital space that draws and captures attention.