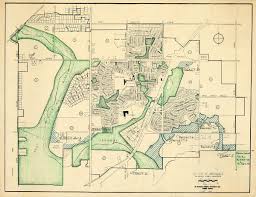 Greendale, Wisconsin was built as part of FDR’s “Greenbelt” project in the 1930s. It was built as a suburb of Milwaukee, for the purpose of housing its residents and to create construction jobs in the Great Depression. They built it on farmland, and preserved part of it as an actual “greenbelt” separating the community from downtown Milwaukee, partly so that residents would shop in their own community rather than walk to Milwaukee proper. Most of the units were single-family homes with 2-3 bedrooms and a garden space. The original plan wanted to build and sell 3,000 units, but by 1939, they only had 572 units. This meant that each unit was priced higher than originally planned for. Because of these high prices, and the fact that planners did not sell to Black people or families where both spouses worked, the population was very homogeneous, and definitely not lower-class. We can see how it adheres to Perry’s original plans, with each small subdivision of the neighborhood centered at least in part on an important building, like schools.