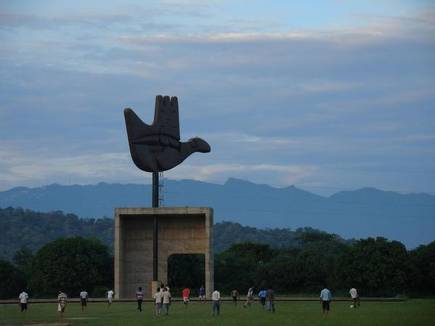 Chandigarh’s Capitol Complex, whose plan and buildings were designed by Le Corbusier, is located at the northernmost point of the city and today houses the administrative bodies of both Haryana and Punjab. The monumental, symbolic architecture interspersed throughout, including the Open Hand monument (a sign of “peace and reconciliation” according to Le Corbusier), captures the optimism of Nehru and post-independence India, monumentalizing a break from the imperial tradition of city making that occurred prior. The image, depicting the Open Hand monument, gives a sense of their scale.