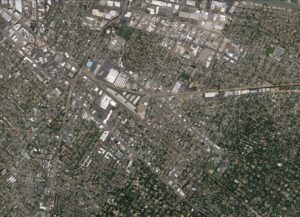 Fair Oaks is a neighborhood on the southeastern side of Redwood City, CA. In an almost completely suburban environment, Fair Oaks stands out as a well defined neighborhood, featuring community connection, a generally well defined extent (above the arterial on the bottom, left of the trees, and straddling the fork in the train tracks), and political power within the broader city. It is primarily Mexican-immigrant neighborhood, with many first and second generation families living there and giving the area a distinct character. Though decidedly larger in population than Clarence Perry’s vision, it’s still a cohesive neighborhood despite being split up by railroad lines. It seems that these rail lines act more as seams than barriers. Its self sufficiency comes from numerous services within its boundaries, ranging from locally-owned grocery stores to auto repair and more. Recently, the community has succeeded in attracting more public investment from the City relating to infrastructure and social services. The nexus of the community is the Fair Oaks community center, which is near one of the rail lines, and provides a hub of activities for local residents. The area also has a good number of schools, religious centers that represent the local population, and decent access to downtown. Perhaps the only area of improvement for this neighborhood is economic diversity, as despite being in the Bay Area it is relatively low-income. The trick would be creating a better income mix, while avoiding gentrification (which, in the Bay, is very tricky). Other than that, it’s a shining example of organic neighborhood growth that the city has only come to appreciate in the last ten years.