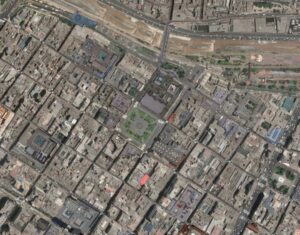 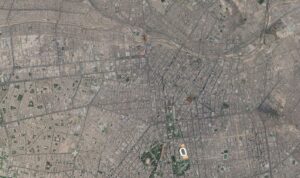 The capital of Peru and the largest city in the country by far, Lima has seen over 500 years of urbanization built off of the original Spanish colonial pattern. Lima’s original nine squares can be seen abutting the Rimac river, featuring all the standard attributes of a Spanish colonial town plan. But the latest satellite imagery shows that this grid hasn’t been extended perfectly, there’s substantial grid deformation as one gets farther from the original center. This is an excellent example of a grid, featuring planned regularity and some organic attributes to keep it interesting. Moreover, while access to the “center” isn’t as easily achieved as in say Chicago, the center of the city has sort of grown in size to match the needs of the local residents, distributing function rather than relocating, which adds to the coherence of the grid.